‹ Previous article Next article ›
KEYWORDS:
agri-food trade, Balassa index, comparative advantage, the United Kingdom
DOI NUMBER:
10.15414/raae.2018.21.02.87-93
ABSTRACT:
The United Kingdom as a member of the EU can enjoy full access to the Single European Market. In terms of agri-food trade, EU is UK's most important partner. However, in June 2016, the UK opted to leave EU. This decision will significantly influence the whole economy of the UK including agri-food trade. The objective of this paper is to examine development and comparative advantages of The UK's agri-food trade with respect to the EU-27 markets. The analysis is based on Balassa index and its stability over the period. The agri-food trade data were acquired from Eurostat Comext database and cover the period 2000-2016. The analysis showed that over the period, the UK was able to retain comparative advantages only in three categories – HS 03 Fish, HS 21 Miscellaneous edible preparations, HS 22 Beverages, spirits and vinegar. In the rest of agri-food commodities the declining trend can be observed and in 2016 the UK had comparative disadvantages in 21 agri-food commodities. Based on the results of regression focused on the stability of distribution of Balassa indices over time, we can conclude that the degree of specialization in the agri-food trade between the United Kingdom and the rest of the EU has been decreasing as the number of commodity groups with a comparative advantage has been declining. With respect to Brexit, the agrarian trade of the UK deserves special attention, because the potential increases in trade costs are expected to affect the UK proportionally more than the EU-27.
JEL CODES:
F10, F14, Q17
PAGES:
87 - 93
Please Cite this Article as: 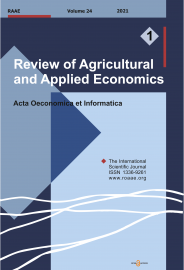